Not so Shy Guy anymore

When Jakob walked into our dojo just over 3 years ago he was a totally shy, hide behind mum, kind of 3 year old. He was too scared to join in the classes without mum, and quickly didn’t want to do the classes at all. Within 6 weeks Jakob had given up karate. So the journey that lead to Jakob winning a Silver medal at the Queensland Karate Association (QKA) Inivitational Championships 2 weeks ago is nothing short of spectacular.

I’m sure when Jakob is older he will thank his mother for many things, but I do hope that one of them is setting an strong example for him at karate. When Jakob was struggling with joining in at karate right back at the beginning his mum, Lisa, decided to start karate as well to set the example. Even when Jakob quit, Lisa continued with her training. Jakob came and watched Lisa train some times, and watched at home  as she tried, struggled, asked for help, and achieved belt after belt.
It took a full year, but out of the blue with no encouragement from Lisa, Jakob said he would like to try karate again. Jakob took up his training again at 4 years of age, and has progressed through from our Cubs classes to our 5-7 year old Little Lions class, with a focus and dedication beyond his years. Jakob practices at home, again with out pushing from mum, but always excitement and encouragement when Jakob expresses the desire to practice more. It was also this encouragement when Jakob expressed an interest in trying our Club Tournament competition. And his practice and focus paid off with several medals in these competitions and caught the eye of the instructors.
Jakob was asked if he wanted to join some of the bigger boys from the dojo in a team kata event at our Shukokai Union Competiton earlier this year. Team Kata has the same requirements for competition as the individual event, but with the added challenge that the 3 team members must before the kata in time with each other as well. Building on the confidence he had gained from his hours of practice and success in the individual competitions and medals he had earned. Jakob agreed to working as part of the team for the upcoming competition.
Jakob, Oscar and Kent worked hard with Sensei Junko in preparation for the competition and also encouraging each other as they trained and learnt together. The work again paid off with a second place medal at the Shukokai tournament. With this under their belt it was time to stretch a little further and enter into a Queensland wide competition against other karate styles and schools.
On the Saturday morning of the competition Jakob and Lisa walked into the Cornubia Park Sports Centre and said Whoa. This was a serious tournament with stadium setting and lots of competitors, the Jakob of 3 years ago wouldn’t have walked passed the front door. But experienced Jakob pushed past his nerves and walked into the stands the went out the back to warm up with his team.
The boys did exceptionally well for the first QKA outing in the team kata. They worked through their first two rounds and made it into the final to take second place against another very strong kata team. Feedback from the judging panel was also great, with some suggesting that the boys should consider entering the team in the National Championships based on the performance they showed in the event. 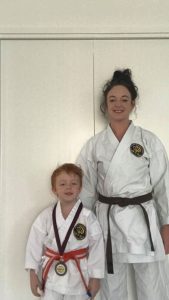 Jakob also braved the individual kata event with the youngest age division, 9 years & under. If you have been doing the math above, Jakob is only 6. Against some older competitors and with the usual first BIG competition nerves Jakob announced the wrong kata, but remaind composed and corrected himself before completing a very solid performance. With another 3 years before he moves out of this age category he has plenty of time to work on building on this experience.
It has been great to watch Jakob’s confidence grow as he contined with karate, and also to see the persistence and example set by Lisa has turned a super shy child into one that actively seeks out new challenges and faces his fears.