Bringing Gold back to the Coast! 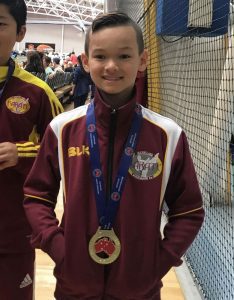 Discipline and focus are the watchwords for young karate student, Oscar Gardiner, and have been a big focus for him in the lead up to the AKF (Australian Karate Federation) National Championships held on the first weekend of August in Caloundra, Queensland.

Oscar has been putting in extra hours of training several days each week to work on his technique and performance, in addition to his regular karate training. Finding a balance between his school work and commitments at Coomera Springs State School and other sporting commitments including soccer, sometimes running from soccer training to extra karate practice.

All of this practice and time management has paid off with Oscar securing first place and the Gold Medal at the National Championships. Oscar set a great pace early on with strong performances in his first 2 rounds, securing 5-0 flags from the judges showing a confident victory against his opponent. Later rounds showed some great competition with coach Sensei Junko commenting, “There were some boys with very good balance, and good technique. We will need to work harder for next year.” 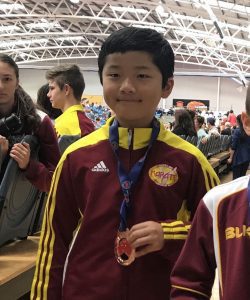 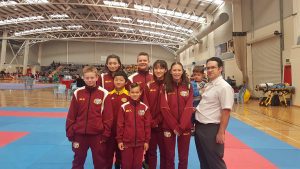 Kent Oiwa, Oscar’s training buddy and student at Upper Coomera State College, also did very well at the National Titles receiving Bronze Medals in both Kata (forms) and Kumite (sparring) divisions. Not many competitors can boast medals in both competition disciplines at a national level. This year was Kent’s second national titles and receiving medals in a field of over 40 competitors is no short order, with fierce competition from children from all over Australia.

Senior Kata Coach for Australia, Sensei Stephen Kelly, commented, “Both boys have done very well, and puts them in great standing for selections if they have aspirations of representing Australia in the future.”

With the 2020 Olympics not far around the corner and Karate’s inclusion in this prestigious event, and possibly future Olympics Games, both boys have big goals of representing their country, as well as Oceania and World Championship. Events run by the WKF (World Karate Federation) and OKF (Oceania Karate Federation) that occur every two years. Proving that they are not prepared to rely on their past performances both boys were back in the dojo and training hard the next day after the competition.

Using their experiences and performances, as well as taking the opportunity to observe the older competitors at the Championship the boys are working hard to prepare for next year, as well as the QKA’s Brisbane Schools tournament rounding out the competition year in October. Every competition is another chance to measure their improvement and help prepare for the next big event.

In addition to their own training both Oscar and Kent are part of the leadership team at Kansai Karate Gold Coast helping out in classes with the younger students, and training with and encouraging the next generation of tournament hopefuls. Giving back to the dojo and supporting their teammates is something both boys feel is a very important part of their karate training.